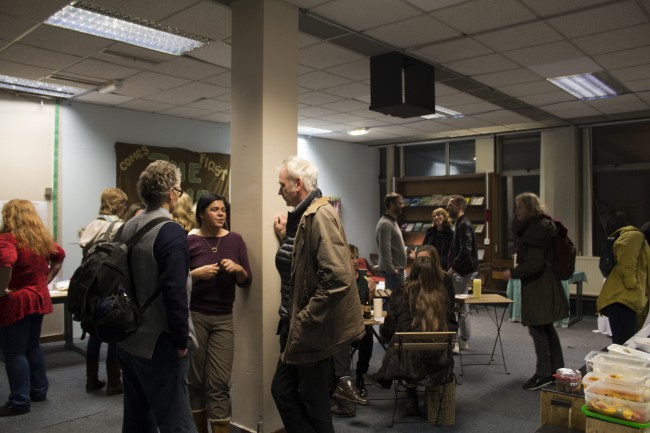 The Harvest Film Festival is a free event celebrating the harvest season with feature and short documentaries that explore the themes of land use, agroecology and food production. The film programme starts at 2pm and there will be an indoor market of food, drink and information relating to small-scale agriculture. At 5pm we will be showcasing an hour-long programme of fantastic short films that relate to the festival themes, shortlisted from this year’s Harvest Short Film Competition. The event culminates with a screening of Manufactured Landscapes, which follows photographer Edward Burtynsky on his travels through epic industrialised landscapes. The film programme is curated by Maria Benjamin.

Please join us for this free event, all welcome.

Written and narrated by the then UK Poet Laureate Sir John Betjeman. The film celebrates suburban life in the area to the Northwest of London that grew up in the early 20th century around the Metropolitan Railway.

Specially bred with less feathers and more meat, The Delmarva Chicken of Tomorrow is a film that dream-walks from the beaches of Mirtsdroy, where huge tourists, plucked and oiled, baste themselves standing up, to the muddy markets of Sumatra, via an archipelago of Export-Processing zones and television archives.

A French documentary, the film tracks a series of gleaners as they hunt for food, knicknacks, thrown away items, and personal connection. Varda travels the French countryside as well as the city to find and film not only field gleaners, but also urban gleaners.

This documentary reveals the gritty underside of industrial landscapes. Photographer Edward Burtynsky explores the subtle beauty amid the waste generated by slag heaps, dumps and factories. Memorable scenes include a Chinese iron factory where employees are berated to produce faster, and shots of children playing atop piles of dangerous debris.

Yellow is the third in a spectrum series matching the seven colours blue, green, red, yellow, orange, indigo and violet with seven places one in each of the seven continents Africa, Europe, Asia, Australia, North America, South America, Antarctica.

Willie comes from the series The Realm of Forgotten Existence which is a microhistory of the postwar realities of life in a rural area on the Scottish – English border, Berwick-upon-Tweed.

In this film we meet Mr Stanislaw Piorun at his house. He tells a story about a curse which can be spelled just by a sheer admiration. Mr Piorun gives a solution on how to get rid of a curse.

The timeless activity of working the land by hand, for apparently meagre reward, is played out in farmland, used from the Neolithic period to the present.

Dr Debal Deb is possibly the most important agricultural scientist working in India today. Driven by a desire to benefit the whole of society and not just a hand full of corporations, Dr Deb has tirelessly collected and con- served over 1400 varieties of rice.

Seed Matters is a short film capturing some of the most progressive voices from The Great Seed Festival which took place in October, 2014 to raise awareness of the importance of seed, and to celebrate seed, food and biodi- versity.

Nature, science and mythology are explored through the eyes of an eleven-year-old botanical prodigy.

Farm was made over a five year period, in Long Island, New York. A farmer’s life is repetitive, noisy, chaotic, demanding, relentless, dependent on the seasons, harsh, poetic, beautiful and dusty.