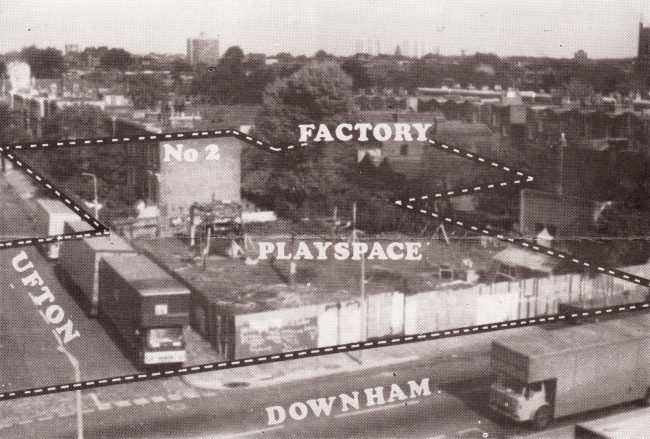 Own De Beauvoir! was a two year collaborative research project and major publication by artist, writer, former Open School East associate and De Beauvoir Town resident Jonathan Hoskins. It explored how archival processes may be mobilised artistically to have practical affects for the political identity of a neighbourhood, through an investigation into how that neighbourhood has become collectively narrativised. By remaining squarely within the single area of De Beauvoir Town, both the project and the publication bring historical material and personal testimony to bear on much broader, current crises of urban space and political action.

The research focused on a 15 year period beginning in the late 1960s. At that time, the neighbourhood of Victorian housing was threatened with near-total demolition and replacement with mass-built social housing, a decade after the same had been imposed on the southern part of the area.

Some residents were in favour of this demolition and some were not. From among the latter arose an organised and effective opposition campaign that lasted into the 1970s. The organisational infrastructure of the campaign catalysed collective action in the neighbourhood for years to come. The period is still well remembered in the area, where house prices are now the highest in the entire borough.

The project began as a series of research and discussion events at Open School East and This is not a Gateway, a festival of critical projects and ideas related to cities. Guest speakers joined from radical archive organisations including the Interference Archive (NYC), the Bishopsgate Institute, On the Record and 56a Infoshop.

Out of these events came an extended, expansive discussion within the neighbourhood on this 15 year period, and its consequences. It developed through introductions and conversations, multiplying its points of contact and proliferating further through material donations and formal interviews, complemented by work in archive institutions.

Content from this research informed concurrent readings, performances and writing. Some took place in art and academic institutional contexts and some did not, such as a series of articles for the local community newsletter. These in turn prompted new contributions and contentions for the project to accommodate. 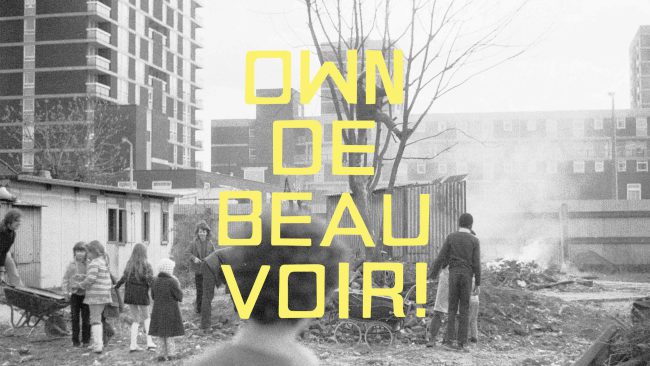 The publication is a semi-fictional narrative of text and images, incorporating some of the donated photographs and documents, archival material and personal accounts accumulated throughout the project.

The fiction explores how an area may be transformed by localised collective action, and by representations that are made of it, in concert with the spaces of that area. It is presented as a recovered personal journal, as the book’s cover blurb explains:

“A personal journal is purportedly recovered from the home of its author, a man who is of the Area.

The author has recorded many months of work, following his discovery that the Constitution of the Area has been threatened with Extraction. To secure its future, he must reproduce the Constitution – identical but re-formed, as complete and coherent as the one he knows. To do that, he must recover all the Deliberation that went into its Assembly. The most decisive period was 15 years spanning the 1970s, when people of the Area worked to redirect its future from the one promised, of total demolition.

His ambition is forever frustrated. The neighbourhood he lives in is the outcome of the decisive period but under inspection it turns up social capillaries, institutional complexities and fragmentary imaginaries at odds with the familiar future they produced…”

The publication launch took place at Open School East on 23 November 2016. It included an extended discussion with Stuart Weir, who was central to the localised collective action in De Beauvoir between 1968 and the early 1970s. This work was part of a long and varied career of activism, journalism and academic research. After his campaigning in De Beauvoir, he became a local councillor, before returning to work for non-state political organisations, including Child Poverty Action Group and Shelter. In the late 1980s he became editor of the New Statesman magazine, before founding Democratic Audit at the University of Essex. He now lives in Cambridge and continues to write for Opendemocracy.net.

Listen to the audio recording of the launch event discussion here.

*Example pages from the publication: 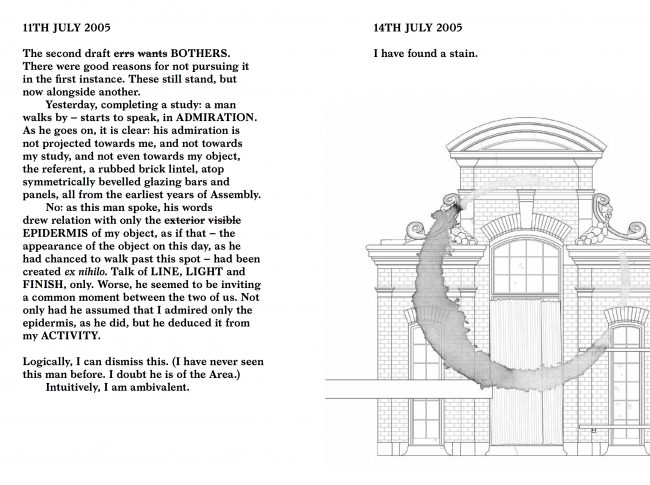 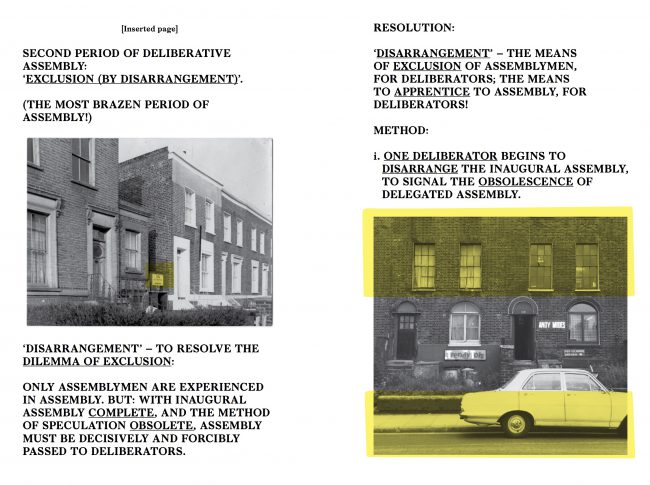 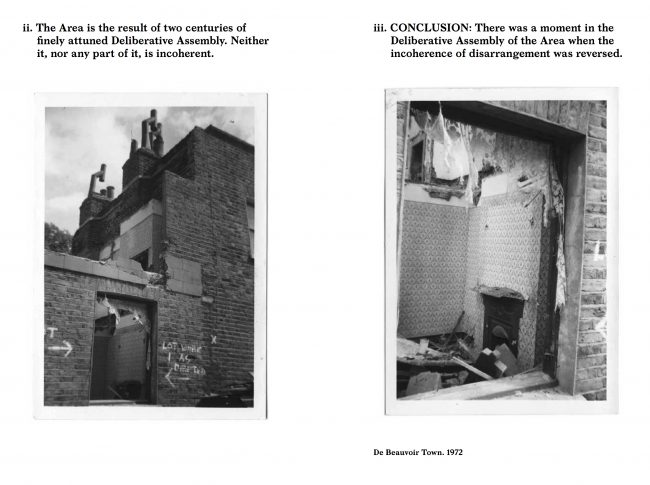 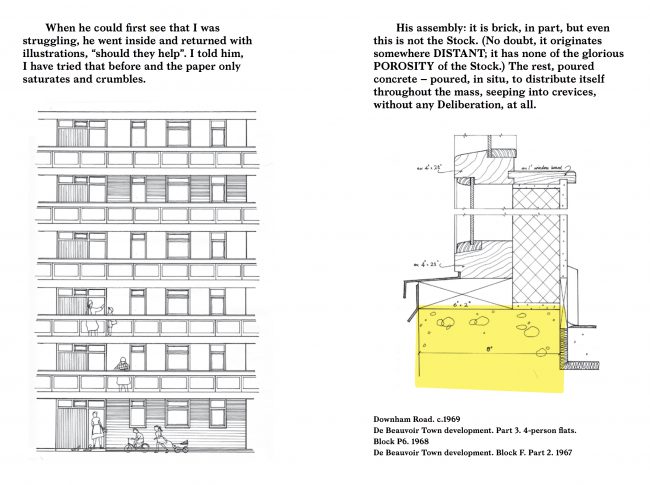 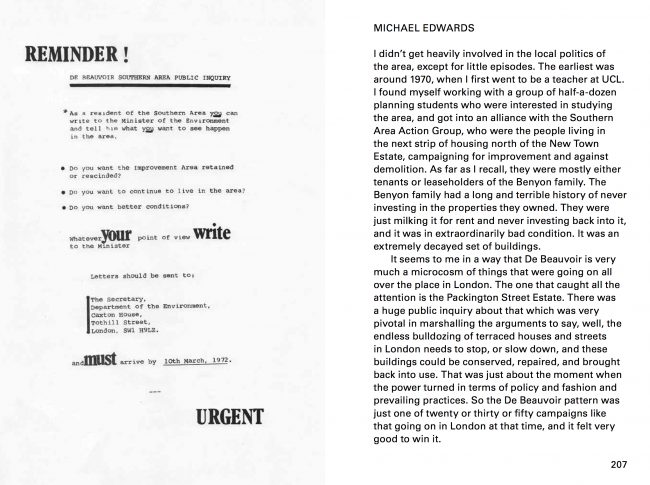 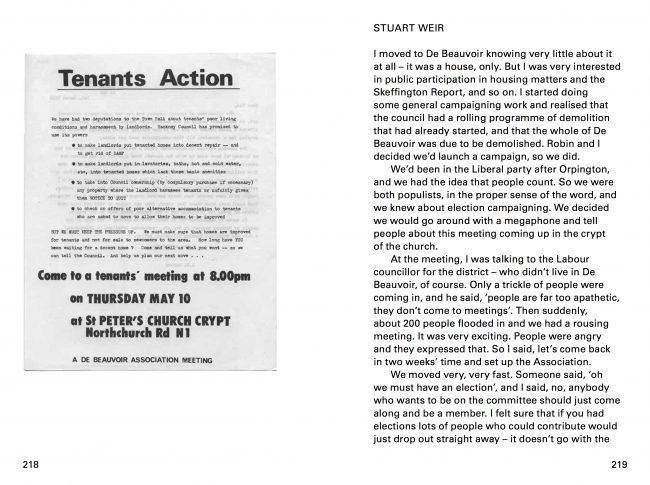 The publication was supported by: