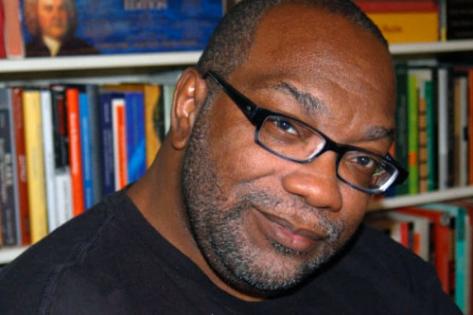 We are delighted to welcome poet and academic Fred Moten to OSE. Numbers are limited so please reserve your place via eventbrite.

An Endless Suddenness: Thinking with music that resists resistance

A public workshop and listening session with theorist and poet Fred Moten and The Otolith Collective of Anjalika Sagar and Kodwo Eshun.

We are delighted to welcome Professor Fred Moten to join us at Open School East as part of The Otolith Collective and Open School East’s Associates Public Programme. This will be an open dialogue between all present hosted by Kodwo Eshun and Anjalika Sagar of The Otolith Collective with contributions by OSE Associate Artist Joel Sines, OSE Associate Artist Anni Movsisyan and guests.

Recent debates conducted in the UK between journalists and musicians on the state of black British music articulate an inchoate anxiety over its supposed eclipse of protest and its presumed burial of any politics of resistance. These laments have provoked counter-responses that refute the grounds of the former by nominating tracks such as Shutdown or Street Politician by grime MCs such as Skepta and Novelist which exemplify and amplify the affective tone of political antagonism in Britain today. In the US, and at the same time, critics and fans have argued over whether recordings such as Kendrick Lamar’s To Pimp a Butterfly or D’ Angelo’s Black Messiah succeed in intensifying and dramatizing the general disturbance of the #BlackLivesMatter movement as it has instituted itself from 2014 onwards.

In an unpublished and as yet incomplete text entitled partial correspondence as a preliminary theory of the epic, Fred Moten proposes that another recording, Kamasi Washington’s The Epic, could be heard as ‘the album of the #BlackLivesMatter movement’. To elucidate the import of such a claim, Moten goes on to write, would require a ‘painstaking analysis of a certain economy of comfort and discomfort’. It would entail going to ‘a certain amount of trouble’.

The invitation of the public workshop entitled An Endless Suddenness then, is to move within the trouble initiated by this statement in so far as it animates and is animated by an analysis of the kinds of comfort afforded by music as resistance and the kinds of discomfort engendered by music that resists dominant understandings of resistance. An Endless Suddenness thus aims to practice collective listening as a form of black study that cuts and extends debates that have largely been conducted by and contained within the exclusive precincts of the brotherhood of male music journalism. Beyond the limited vocabulary set by the recording industry and reinforced by music media, An Endless Suddenness aims to practice thinking with music as a mode of black study that moves within the study of blackness and the blackness of study.

An Endless Suddenness is informed by the words of the dancer and choreographer K. J. Roberts who describes encounters with certain forms of music that bring one face to face with an ‘endless suddenness’ that ‘reinforces one’s desire to hear things differently.’ As Fred Moten suggests, it is a matter of listening or looking ‘for what will confirm your desire to be other than what you are’ rather than looking or listening for ‘something that confirms who you are right now’.

Dan Hancox, Party politics: why grime defines the sound of protest in 2016

Jacob Davey, Is 2016 The Year Grime Becomes an Anarchist Genre?

Owen Jones, I was Paloma Faith’s support act – but politics can’t reach the parts music can

Austin Daboh, Is Black British Music Being Erased? No, its just evolving

An Endless Suddenness: Thinking with music that resists resistance has been devised by The Otolith Collective of Anjalika Sagar and Kodwo Eshun in collaboration with Open School East Associate Joel Sines who has organized this event on behalf of SOULESSNESS, the public programming group founded by Anneke Kampman, Eleanor Vonne Browne, Rosie Morris and Joel Sines.

Fred Moten is Professor of English at the University of California, Riverside. He is the author of Arkansas, Poems with Jim Behrle. I ran from it but was still in it, Hughson’s Tavern, B Jenkins, The Feel Trio, and the critical works In the Break. The Aesthetics of the Black Radial Tradition and The Undercommons: Fugitive Planning and Black Study with Stephano Harney.

The Otolith Collective is a publically funded arts organisation run by Kodwo Eshun and Anjalika Sagar of The Otolith Group. The Otolith Collective develops discussions exhibitions and screening programmes with galleries, museums and foundations. Recent exhibitions include The Chimurenga Library, 2015, Graeme Thomson and Silvia Maglioni: it took forever getting ready to exist, 2015, and Mark Fisher and Justin Barton: On Vanishing Land, 2013, at The Showroom, London

This event has been programmed by the Soul-Less-Ness group of OSE associates, a curriculum for sound, voice and performance, exploring modes of production, methods of representation and the future politics of listening. The series includes three ‘Writing for…’ workshops, transforming written texts for radio, performance and documentary.