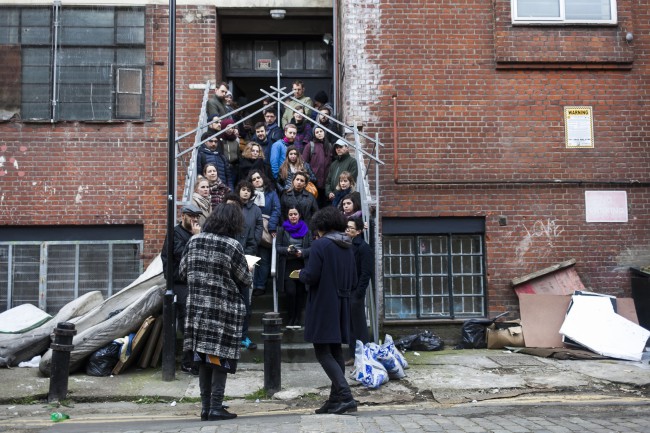 In partnership with Gasworks, supported by the Calouste Gulbenkian Foundation, Open School East welcomed artists Carla Cruz and Antonio Contador for six months in 2015, from January to June.

While at Open School East, Antonio Contador and Carla Cruz developed Finding Money, London & Paris Diary, the second iteration of a project focused on an everyday occurrence: finding money in the streets of London and Paris – where each one of them is based.

Finding Money was initiated in 2011 and was presented for the first time in Marseille in 2013. The year-long cycles of performative search are recorded through an ongoing diary (the 2013-2015 segment was published within the context of the residency at Open School East). This narrative documentation was the main source of material for other public events such as walks, talks, astrological consultations, broadcast readings and magic sessions. The printed diary was presented at TransActing: A Market of Values in July 2015.

Antonio and Carla will be presenting this and other printed materials at OSE in November 2015.

Listen to the radio broadcast here:

Carla Cruz grew up in Portugal and now lives between London and Porto. She has a PhD in Art Practice from Goldsmiths, University of London. Her recent projects include initiating the Walthamstow Performing Arts Collective in London 2014; Finding Money (installation with Antonio Contador) at Galerie Karima Célestin, Marseille, France, 2013; Rastilho, and a project for ReaKt Views and Processes, Guimarães 2012, European Capital of Culture, Portugal.

Antonio Contador was born in Vitry-sur-Seine (France). He graduated in 1997 (ISCTE/Lisbon), then became a sociologist and a lecturer before resigning a few years later to start an artistic career and undertake a PhD in Aesthetics (Sorbonne/Paris I). His recent exhibitions include Matérias Baixás/Baixás Matter, (performance in three parts and an epilogue/installation), Museu da República, Rio de Janeiro, 2014; Sam (play in IV movements, with Julie Béna), Palais de Tokyo, Paris, 2014; Finding Money (installation, with Carla Cruz), Galerie Karima Célestin, Marseille, 2013.