Taking Margate’s caves and tunnels as a starting point, Spelunking took the form of 8 thematic public workshops organised by OSE associates, which led the participants on a metaphorical journey around caves, tunnels, smugglers’ paths, cavities, stalactites, cryptocurrency and subterranean myths. Each workshop was filmed by artist Benedict Drew, who then made a 33-minute video that was premiered in Margate in November 2017 and is available for viewing above.

Organised by Josephine Sweeney, the Spelunking intro session brought together a range of speakers to each give their perspective on ‘the subterranean’. The day began with a screening of a short film by artist Benedict Drew introducing the project, the film we plan to make, the future workshops, and why we were setting off on this exploration of the subterranean.

Heather Newton, a stonemason and Head of Conservation at Canterbury Cathedral, spoke about Canterbury Crypt and St Gabriel’s Chapel. Joanna Murray used sculpture to help explain the Wormhole Theory. Simon Gregory introduced us to the history of Smuggling in Deal. Dr Dunstan Lowe gave a talk on Descending among the Dead in Greek and Roman Myth. Ada Nifosi offered us a unique insight into perceptions of The Womb in Ancient Egypt. And Dan Hind gave us his perspective on Plato’s Cave. 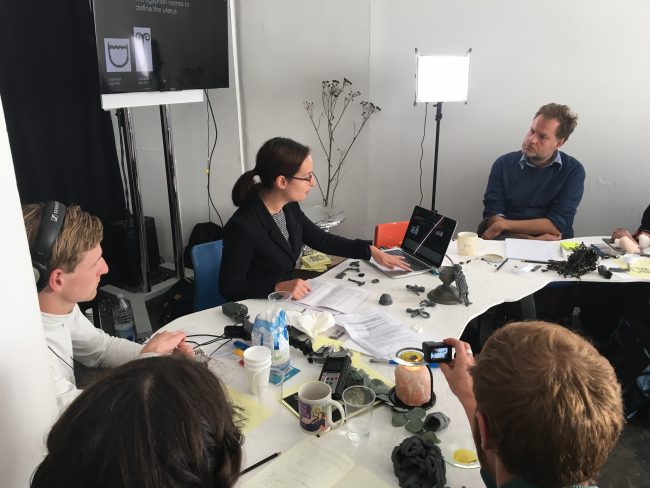 Midday we had a cave-themed lunch devised by local artist and chef Annie Nichols. This feast included different delicious subterranean related foods – things either made, grown or eaten in caves, or evocative of cave spaces and myths. These included mushrooms, pomegranates, Cornish pasties and dried meats. Stalactite-like salt cones served as seasoning – and wove in ideas about salt as an underground, early currency. 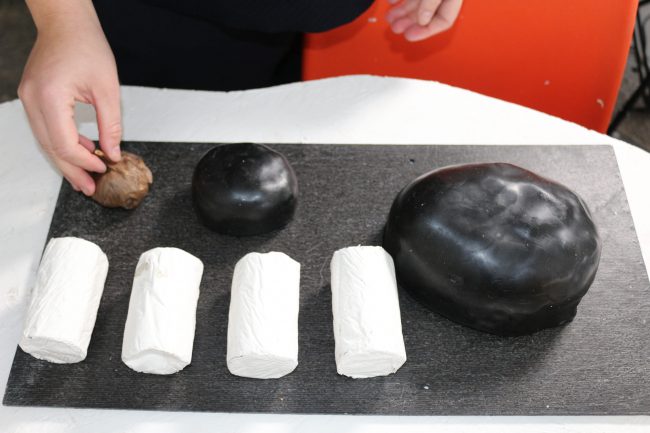 The day was interspersed by questions and discussion. We sat around a specially made, cave-like round table and exchanged ideas and thoughts about the subterranean. Scattered around the table were lumps of grey plasticine that speakers and audience members were invited to fiddle with and sculpt. The resulting small sculptures littered the table, growing throughout the day into their own strange small world. 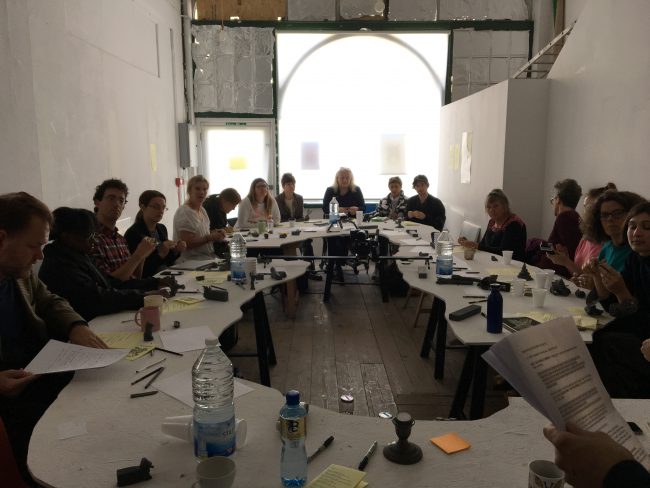 For Spelunking: Stalagmites/Stalactites, Sara Trillo and Chloe Ashley led an experimental sculpture-making workshop inspired by Stalagmites and Stalactites. Divided into four sub-chapters, the day involved constructing a variety of cave formations from plaster, dye, found objects and ice, with the workshop culminating in a collaborative installation.

During Formation, we collaboratively made stalagmites/stalactites, using a variety of found objects and sculptural materials.

Chloe Ashley and Sara Trillo provided a mini plaster demonstration to help with the construction of the group’s stalagmites/stalactites.

Returning to the objects formed within Dripping, we excavated our cave pearls, rock formations and mini stalagmites/stalactites.

This was followed by a collaborative installation of the objects created within the workshop. The installation emulated the mysterious stalagmite stone circles constructed by Neanderthals, almost 175,000 years ago. 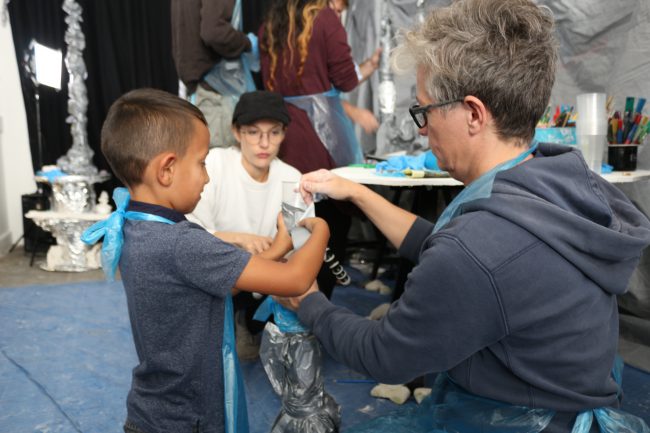 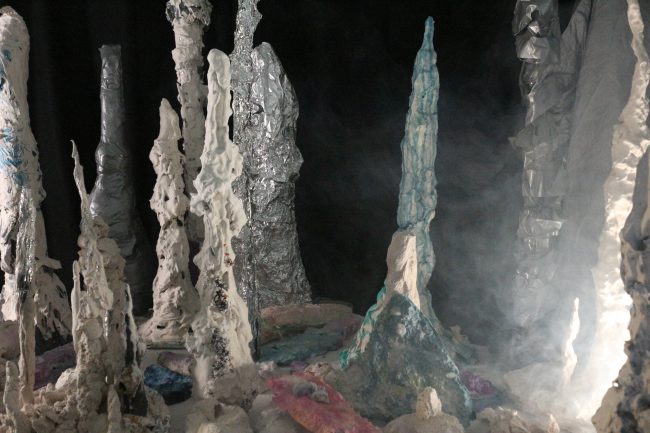 It started with a brief introduction to somatic movement and an overview of the function of the lungs; within this we did a couple of visual breathing exercises to map out the location of different organs and imagined interior cavities.

The next section of the workshop was spent practicing the Duong Sinh series of Qi Kong techniques to wring out and massage the organs and begin to set patterns for breathing, circulation and rid the body of toxins.

This then transitioned into a detailed exploration with singer Jodie Watson of the anatomical and physiological processes of the voice. She then led a series of vocal experiments, leading into a couple of group harmonies.

After tuning into our bodily processes and each other’s voices, the afternoon finished with a group improvisation, using four octaves of a tone chime set to fill the room with multiple resonating tones and sonic vibrations. 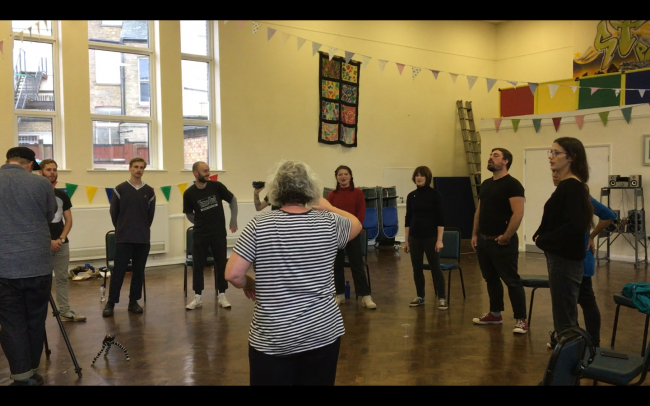 During the Cavities session, Roxman Gatt and Lou Lou Sainsbury led an exploratory video and drawing workshop looking into vore pornography and the mouth fetish. Departing from a reading of George Bataille’s short essay La Bouche, with a presentation of examples of vore video material, participants were invited to explore their bodies, mouths, crevices and surrounding orifices of the OSE studio, generating video material using endoscope cameras.

The resulting footage was then live edited, as participants were led to explore their often invasive and revealing experience of using the endoscope cameras, through an intimate drawing-to-video session. This was accompanied with a selected playlist compiled by associates George Harding and Lou Lou Sainsbury, creating a sonic backdrop for the subterranean.

Listen to the playlist here. 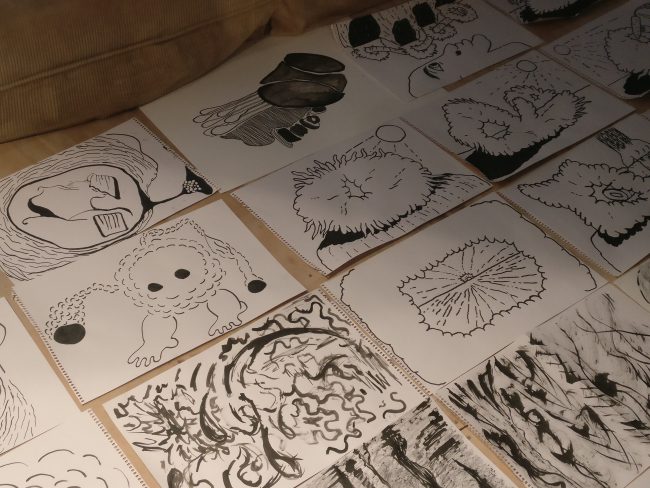 Taking the project offsite to Pegwell Bay, George Harding and Lou Lou Sainsbury led a guided sound walk around the Kent shores. We began the day with a brief reading group on the shore, first reading an introductory essay on Deep Listening by Pauline Oliveros, followed with an excerpt from Voodoo Science Park (Halford & Beard), focusing on the origins of the folkloric Tommyknockers. Both texts highlighted the basis of deep listening as a ‘going-in’ to the subterranean, a tool for seeking warning signs and a sonic map to shape architectures in our troubled landscapes.

Midway through the Spelunking project, the workshop came at an apt moment to reflect on the subterranean as a quieter space. Somewhere to stop, listen and think. A space to tap into a folkloric past and an ever-changing present. 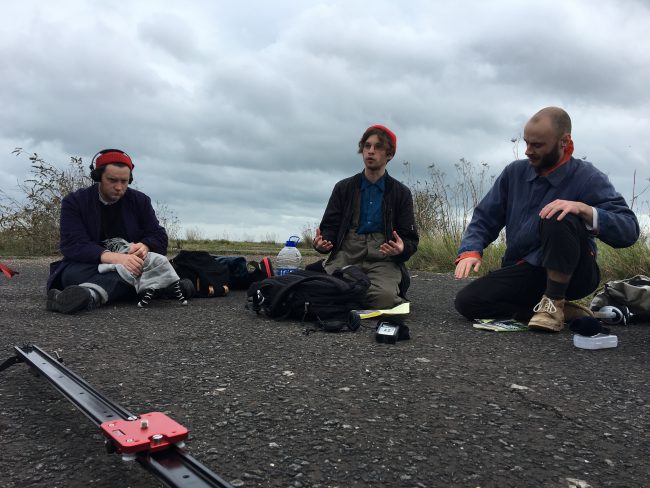 Emma Gibson and Emily Whitebread ran Discover Your Inner Shell Lunatic, a workshop exploring value and currency through the lens of 17th century ‘Conchlyomania’. Taking you on a deep dive into the history of “shell-lunatics” by first presenting a history of collecting natural vs man-made creations as systems of value, participants were then invited to bring shells gathered from the shorelines of Kent (or use our pre-gathered finds) and embark on an alteration process, where every shell found was released back into the wild in a new, even more collectible form during a closing expedition. 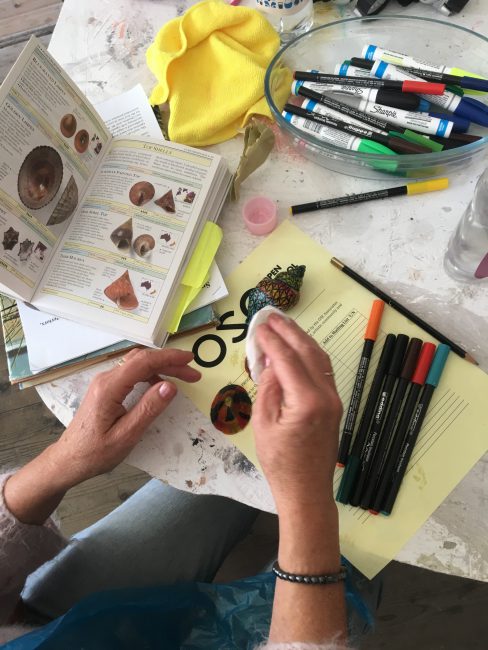 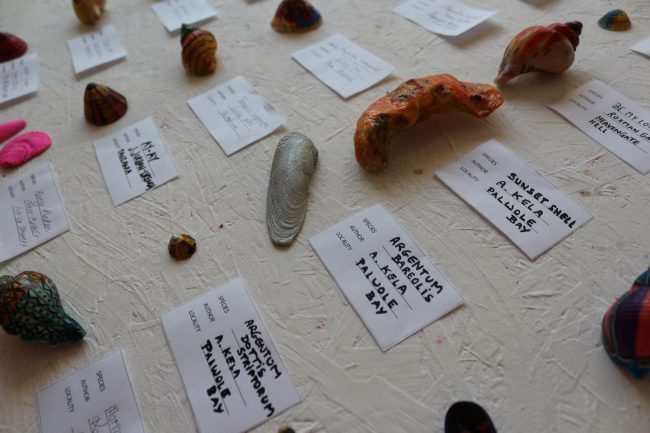 Agitation Jeopardy was devised by Kris Locke and Josephine Sweeney as a way to explore the underground / unregulated nature of cryptocurrency, examine the intersections between virtual and physical mining and speculate on the trajectory of a rapidly expanding technology.

For the second half of Agitation Jeopardy the unusual business model of Sandcoin (in which a crytpocurrency holds both a virtual and a direct material value) was introduced as a speculative model for considering the future applications of blockchain technology. The audience participated in an art attack scale, sandy adaptation of the game boxes, in which players take turns to join dots with either a horizontal or vertical line and compete to control territories.

The second challenge produced a landscape the group could inhabit. Everyone was then asked to participate in a short reading group taken from a text called Terra0 by Paul Seidler, Paul Kolling and Max Hampshire. The text outlines a prototype for a self-utilizing and self-owning piece of land that uses blockchain smart contracts to procure its real exchange value and eventually buy itself. A discussion developed drawing from the real world model of Sandcoin as a point of reference and the speculative text Terra0 as a point of departure. 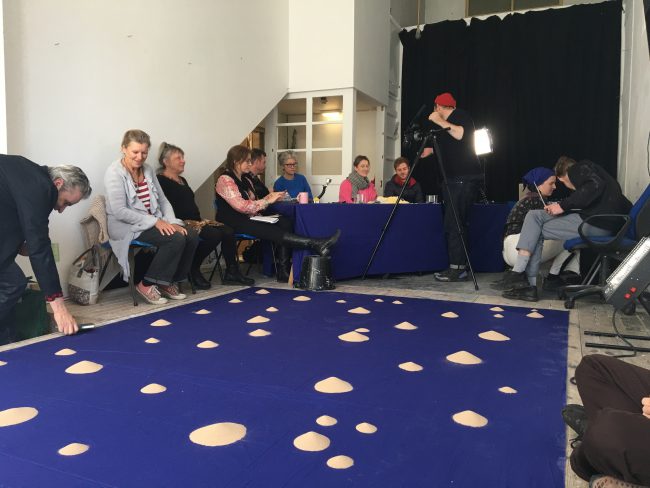 “Words don’t express my meaning,
Notes could not spell out the score.
But finding, not keeping is the lesson”
Bryan Ferry, Roxy Music, 1972

For the final Spelunking workshop, George Harding and Lou Lou Sainsbury led Finding a Knocker: The Well of Many Worlds, a writing workshop based on the fantasy role playing game Dungeons and Dragons. Participants were guided through a scripted narrative into the Well of Many Worlds, a portal to an alternate universe, where they could explore their fantastical body and the new world in which was shaping it.

As they were led, participants wrote or drew their responses to the script… documenting as memories might haphazardly have appeared, and strange ethereal pop music disrupted their journey. Participants were then invited to read out and share their responses in a reflexive group discussion, noticing the resonances with each other’s texts and highlighting the often intimate journey that the Spelunking’s subterranean exploration was. 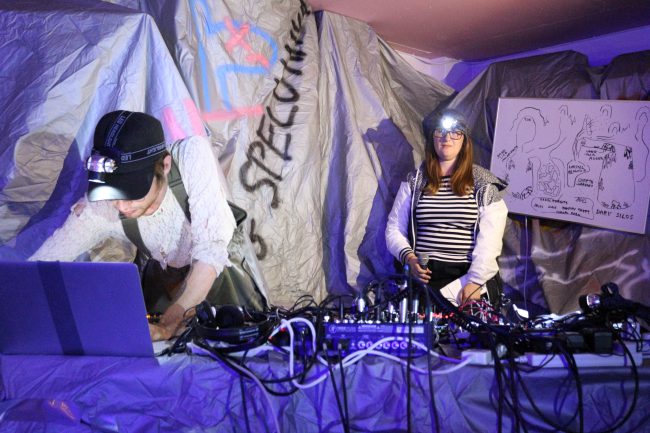 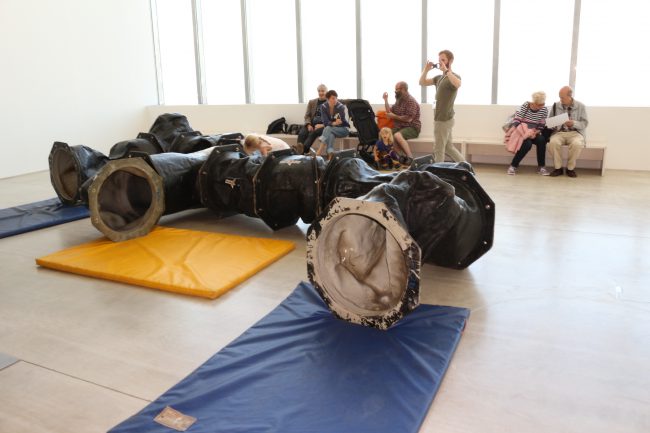 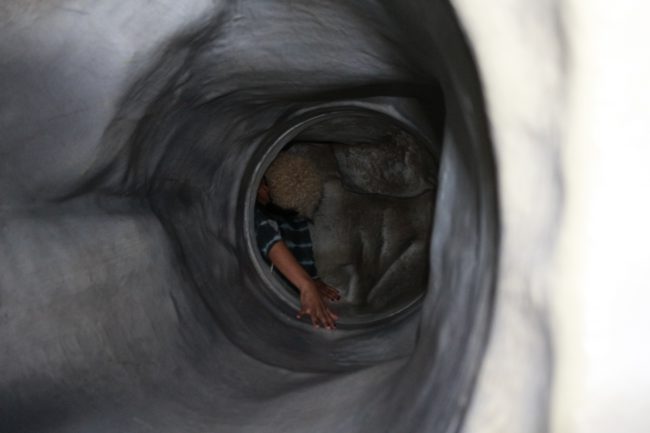